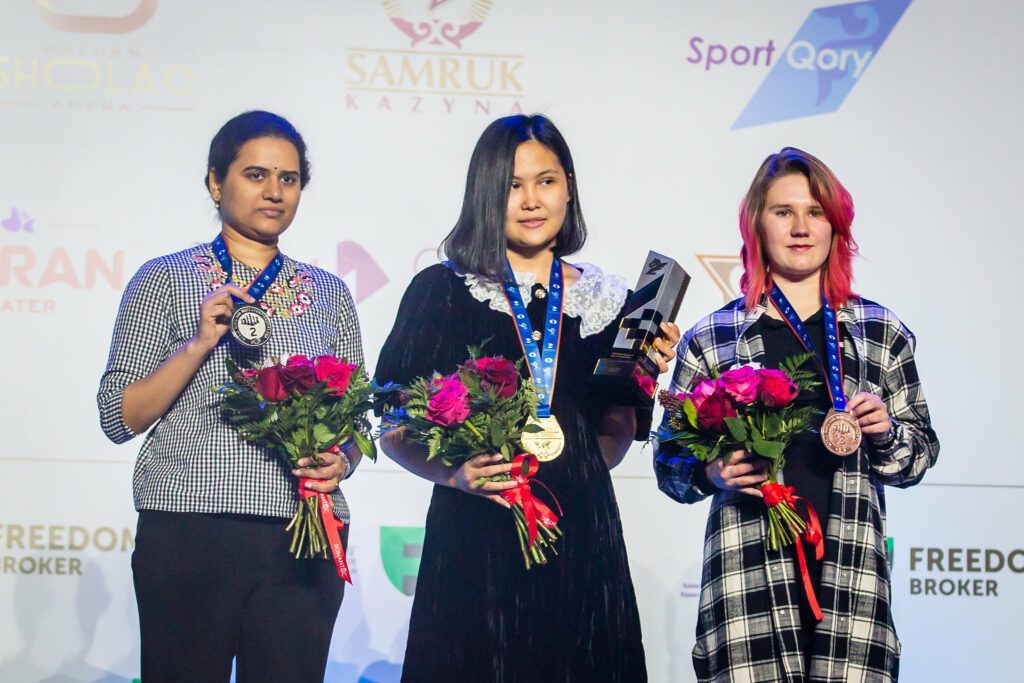 In the Women’s Rapid tournament, China’s Tan Zhongyi and Dinara Sadaukassova of Kazakhstan finished in a tie for first place after 11 rounds of play in the Women’s Rapid with 8,5 points each. The winner was decided in a Blitz tie-break in which the first game was drawn, but the second went Tan’s way.

This is a huge success for the former women’s World Champion and the first gold for China in the women’s rapid since 2018. Tan has played convincingly thought the tournament, not losing a single game. This is another splendid performance by Tan Zhongyi following her victory in the Pool B group of Women’s Candidates.

However, the best is yet to come: “The event is not over yet; my favourite part – blitz – is ahead. So I will be thinking about the celebration in the new year,” said the Chinese Grandmaster.

The second place went to Dinara Saduakassova of Kazakhstan, who made sure that her country retains the silver in the Rapid, first won by Bibisara Assaubayeva in Poland in 2021.

Four players are sharing third to sixth place. The big Indian surprise of the event, Shri B Savitha, continued to play well, and she came on top of the group of players with eight points, followed by Aleksandra Goryachkina, Zhansaya Abdumalik and Humpy Koneru.

In the Women’s Blitz tournament, Bibisara Assaubayeva of Kazakhstan finished in first place with 13 points out of 17 rounds. Her success is significant because she managed to defend the world title in Blitz (the previous women player to defend her Blitz crown was Kateryna Lagno, in 2018 and 2019).

Humpy Koneru of India took second place after finishing with 12,5 points, and Polina Shuvalova and this year’s Women’s Rapid winner Tan Zhongyi tied for fourth place after both scoring 12 points.

Having started day two of the Blitz a full point and a half behind the leaders (6/9), Assaubayeva had a spectacular second day. She won seven games and lost just one (to Polina Shuvalova).

In the press conference following her victory, Assaubayeva said she felt very emotional having managed to defend her crown (“which is more difficult than to win it”), but also that she achieved this in her home country.

– I am very delighted that I won in my home country. I felt I had a lot of responsibility on my shoulders. Unfortunately, I got sick after the first day of the Rapid so I wanted to show all my strength in the Blitz.

Kazakhstan won two medals in the Women’s tournaments: silver in the Rapid and gold in the Blitz. This is a huge success for this Central Asian country which has recently expanded investment in the game and is hoping to organize additional international chess competitions.