Global Exchange Forum: Facts and myths about gender in chess 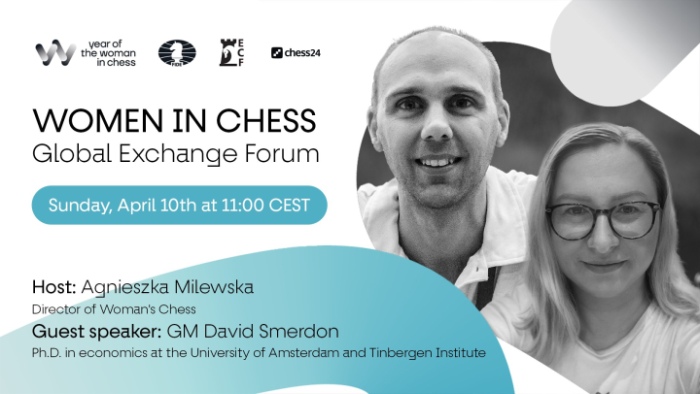 The Year of the Woman in Chess is in full swing with the strong engagement of women in chess worldwide through workshops, training seminars, fundraisers, and women’s day events, organized by the FIDE Commission for Women’s Chess.

One more online event – the Global Exchange Forum, a quarterly seminar aiming to connect chess officials, organizers and influencers working on behalf of women around the globe – was organized in cooperation with Chess24. The first one in a series took place yesterday. The event was hosted by Agnieszka Milewska, Director of Woman’s Chess and Eva Repkova, Chairperson of the FIDE Commission for Women’s Chess.

The special guest of the forum, GM David Smerdon, presented research on the gender gap in chess” Facts and Myths about Gender in Chess”. David is a Ph.D. in Economics at the University of Amsterdam and Tindergen Institute. He was awarded the title of international grandmaster in 2009 and has represented Australia in seven chess Olympiads. Smerdon was part of an international research team of academics that included GM Hou Yifan, one of the best female players in history and the current #1 rated woman. They took an in-depth look at some of the challenges women face in chess and the possible approaches to address them.

According to the results of the research, girls drop out at faster rates than boys at all ages, but the drop-out is especially severe after age 16. Besides, there are both participation and performance gaps for women in chess. It is caused both by social and biological factors. Stereotypes are among the social factors that negatively affect women’s performance. Multiple studies have found that women chess players play worse against men than against other women, while men modify their playing style when facing women – they take longer to resign against women and play riskier openings against attractive females. Some evidence shows that women and men exhibit a similar life-cycle of chess strength, except for women who have children, which is both biological and social factors.

When speaking of boosting female participation in chess, it was noted that role models matter for minorities in competitive environments. For example, Ugandan girls who watched “Queen of Katwe” before their math exams were 44% more likely to pass. Having a female leader among Indian polititians means girls are more likely to pursue politics, and delay marriage and children. The same happens in chess. Not just top players can be role models for girls playing chess. It can be trainers at all levels, administrators, arbiters, organizers, commentators, and streamers.

Peer effect is another thing that can shorten the gender gap in chess. In men-dominated environments, having more women peers significantly helps women. The results of the research show that having to train alone, feeling pressure to represent all female players, and lacking social/friendship groups cause disincentives to continue for female players.

Smerdon’s recommendations on how to increase the numbers of women playing chess are:

– Develop and publish an annual Women in Chess Federation ranking

For more information about the research, you can watch the Exchange Forum on FIDE’s Youtube channel or download David Smerdon’s “Facts and Myths about Gender in Chess” presentation.